Return to the Blog Home Page

The Secret Life Of A Kestrel: How Webcams Revealed A Kestrel’s Second Family

I have been offering food to wild kestrels in my garden for many years now. It all started when I saw a young male kestrel in my garden, looking wet and bedraggled and hungry. Rain was forecast for a week and in sympathy I put a mouse on a fence post over an area of rough grass where I had often seen him perch. The mouse disappeared and the next day so did another. On the third day I watched him as he swooped down and took the mouse. I could not have imagined then this would become 10 year relationship and that I would come to know this wild falcon so well.

Over the years I have become very fond him – if feels to me like he is a wild pet – and I’ve even noticed that the feathers on his shoulders have gone a little grey lately. I call him Kes, after the captive kestrel in Ken Loach’s 1969 film.  Kes flies into the garden for food every day and I can now whistle to let him know when I have put something out for him. He comes straight away and I am able to stay close to watch and photograph him. He and his long term partner, who I’ve of course named Mrs Kes, have become so used to me they frequently nest in the garden. Last year I started watching the pair even more closely. I placed cameras both inside and outside their nest box so that I could watch them 24:7. I then rigged monitors up in my studio, gallery, office and home so that I didn’t miss a single moment. The surveillance meant I was able to capture some magical moments, including when each of their eggs was laid and when their chicks hatched.

This spring started the same as other years. The male and female began by touring the garden and surrounding area, inspecting different nest sites. Thankfully all of these prospective sites were rigged with cameras so I even got an insight into this process too.The male would call his mate into a nest box and entice her in by offering her a tasty morsel; usually a dead vole or dead day old chicken’s chick provided by me – or, if he was really out to impress her, a lizard he had caught himself. As she entered the box he would repeatedly bow his whole body up and down, in a very comical fashion.
After a few weeks of watching her fuss over her different options, I was delighted when they chose one of the nest boxes I had put up in the garden. At the end of April, old Mrs Kes started to lay her eggs. She laid one every other day and started brooding when she had her third egg, before laying two more. 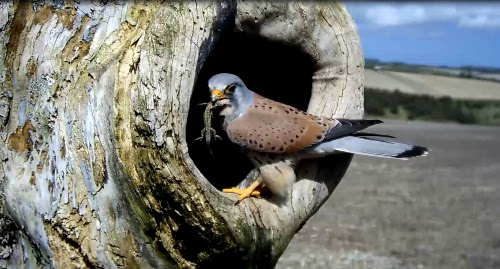 Then one day I saw a female kestrel sitting on the post where I put out food for Mr and Mrs Kes. I looked across at my TV monitors and there was Mrs Kes, as usual, sitting patiently on her eggs, so I knew this must be a new female. At first I didn’t think too much about it, since chicks from previous years sometimes come back. I had noticed that Mr Kes could be quite reluctant about chasing new females away from his territory, but he usually gave males short shrift.
Then I started to see a little more of this new young kestrel flying around the garden and sometimes even coming onto the post to feed. At the end of April, whilst Mrs Kes was still laying her
clutch, this much younger female kestrel appeared in another nest box that I had cameras in. This one was made from an old ash stump and was just 100 yards away from old Mrs Kes’s nest box. In fact Mr and Mrs Kes had visited this nest box just two weeks earlier while they were prospecting for a suitable site. Mrs Kes had rejected it – possibly because both a barn owl and a pair of tawny owls were also considering it at the time. As I watched the monitor, a male kestrel joined the young female in the ash stump. Curious, I looked a little closer. Then I realised with surprise that this was, in fact, Mr Kes himself. Each kestrel is individual and I knew Mr Kes’s markings very well: the tell-tale grey tinge to the blue of the feathers on his shoulders was unmistakable.
Old Mr Kes had a ‘bit on the side’! He was clearly out to impress this young girlfriend because I then saw him offer her a lizard, which would have been amongst the choicest morsels he could have given. Unfortunately, this relationship only lasted two weeks and then this younger kestrel disappeared. But then I noticed there was yet another female on the scene. I noticed this new one digging a nest scrape in the ash stump box. I could tell she was a new girlfriend by the markings on her tail feathers, which are quite distinct from those of the other young female. I suspect
that this third female will have pushed the other young one out of the territory. Before long I watched Mr Kes courting this new floozy. Again, he was out to impress and was feeding her choice morsels. But I noticed that despite his new relationship, old Mr Kes had not neglected his duties to long term partner Mrs Kes as she sat during the long dull days of incubation patiently keeping the eggs warm in the first nest box. I watched in amazement as he alternated between the two females, taking turns to help Mrs Kes incubate her five eggs and then flying 100 yards down the hill to keep up his courtship with the other female.
After 30 days of incubation Mrs Kes’ eggs began to hatch. And, the very next day the new girlfriend laid her first egg. Now, Mr Kes’ schedule was hotting up! Not only did he have to spend the day hunting for his new chicks, but he was also finding time take turns brooding his other bird’s eggs. Visitors to my gallery have been enjoying seeing the two female kestrels with their growing chicks in their respective nests via the webcams when the visit Robert’s gallery in Thixendale. They may even spot a particularly harried looking male dropping by with a morsel of food before
quickly flying off to hunt for more.
I couldn’t help feeling a little sorry for the situation he had got himself into. So I began to put more food out for him to take to his respective partners. Mrs Kes’ chicks are growing at an astonishing pace and the girlfriend’s chicks are due to hatch this week. I’m not sure how old Mr Kes will cope with all these mouths to feed but I admire him for the way he has coped so far. He has looked after both females admirably and gives equal time and effort to both. Kestrels in the UK feature on the RSPB’s amber warning list of species in decline. At least here on the Yorkshire Wolds, Kes is making his own particular contribution to restoring populations!

10 comments on The Secret Life Of A Kestrel: How Webcams Revealed A Kestrel’s Second Family

Painting of the Week

What’s On at the Gallery

What to do when you visit